Ta-da! It’s here! StackStorm version 2.1 has been released, and there are some big changes. So big that we started wondering if we should have called this release version 3.0. Pack management has had a lot of work done, and we think you’ll be pleased with the results. Plus good news for those patiently waiting for Ubuntu 16.04LTS support! 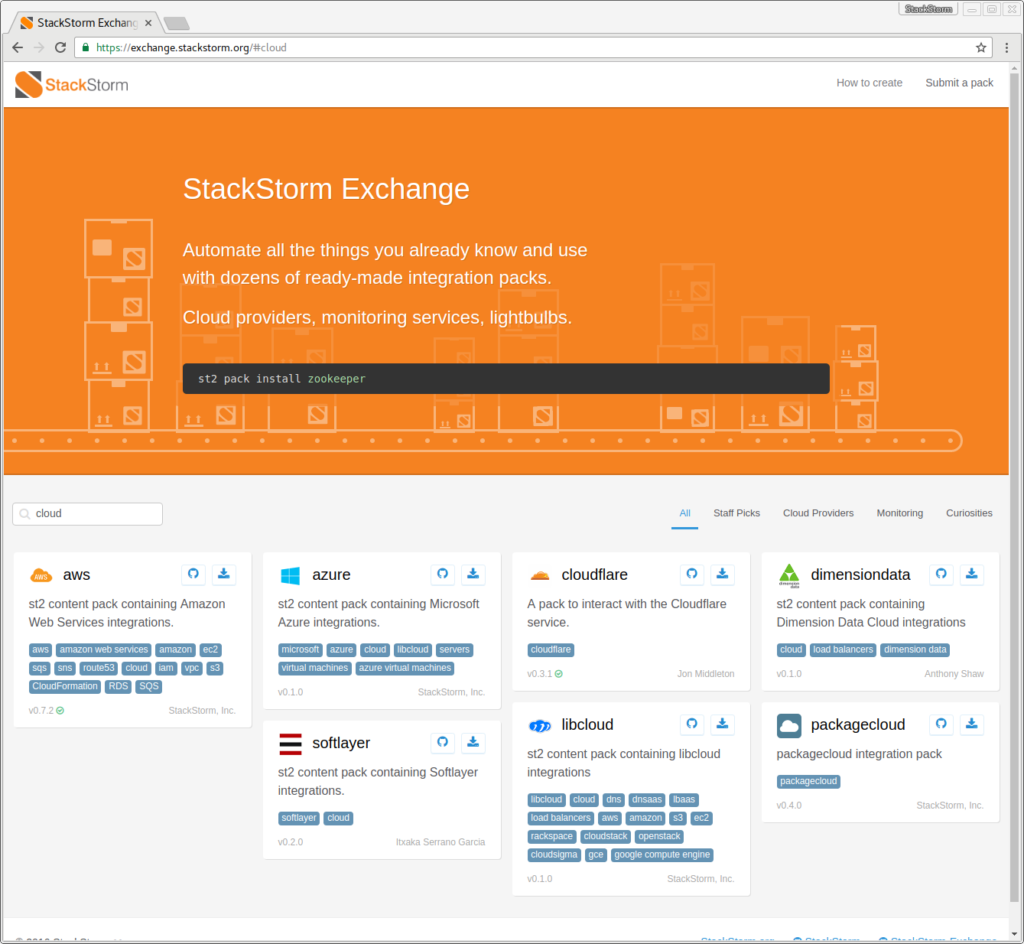 With this change, working with packs becomes more like the “usual” package management you know from working with development platforms and operating systems. Installing, updating, and managing StackStorm packs has become a smoother, more streamlined experience.

We have a new CLI for pack management (st2 pack), new GitHub organisation, and new workflows. Particularly for our long-time users, you must read the documentation to understand the changes.

Key things to watch out for:

All packs in the StackStorm Exchange have been updated to account for these differences. Your private packs may need changes too. It’s a big change – that’s why Dmitri put out the early warning. We’ll also have a follow-up blog coming soon explaining more about the changes, why we made them, and all the cool things you can now do.

So, you started asking for Xenial support about oh, 10s after Ubuntu released 16.04LTS. We’re pleased to announce that it is here at last. Ubuntu 16.04 is now a supported platform, and packages are available. Run the one-line installer, and it will auto-magically sort it out. Or do the install manually. It’s up to you.

Aside: RHEL 6.x/CentOS 6.x is starting to get long in the tooth, and becoming more of a pain to support. How hurt would you be if we dropped RHEL 6.x support in May 2017? Let us know!

OK, so this release is mostly about new pack management. But it’s not just that. There’s a few other fixes & improvements too. The full list is in our changelog as always, but the highlights are:

Yes, there were bugs. We’ve been trying the stick approach with the developers, but it hasn’t worked. Given their dietary habits, I’m not sure the carrot approach will help either. Until we find a way to write perfect code every time, we’ll keep doing what we’re doing: fix bugs just as soon as we find them, and add tests so they don’t happen again.

Thanks to Anthony Shaw, Paul Mulvihill, Eric Edgar and more, for their contributions.

We strongly urge you to read the upgrade notes before upgrading. Things have changed, and if you blindly upgrade without paying attention you will get caught out. It’s bad enough to strike a bug when you upgrade, but it’s more embarrassing to be caught out by a known, documented change in behavior.

New 2.1 packages are now in the stable repositories. If you’re already running StackStorm 2.0, you can upgrade using yum or apt.

As always, we strongly recommend that you treat your automation code as true code – use source control systems, use configuration management systems. You break it, you get to keep the pieces. This is particularly important for this release where we’ve made many changes to pack management.

Of course, if you have any problems, jump into our Slack Community, and we’ll do our very best to help.