As of this week StackStorm is officially a part of Extreme Networks. We’ve changed hands 3 times in 18 months. We’ve survived 365 days of uncertainty. It’s over now. The future is certain and bright, more good stuff is coming soon. Seriously, it’s all good. 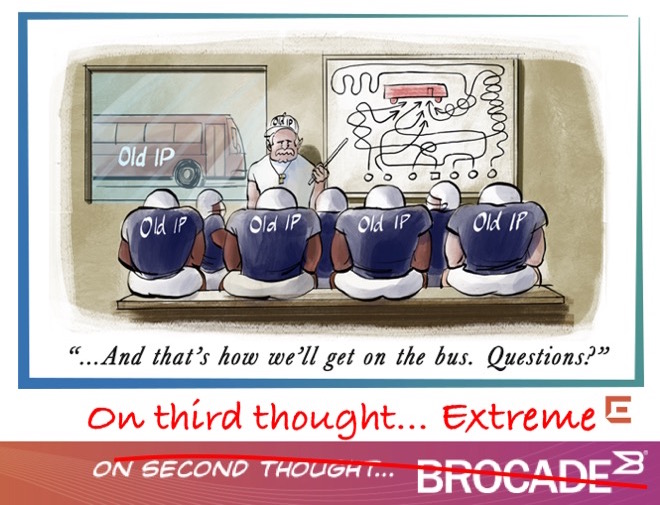 Here is the scoop for those of you who don’t closely follow corporate M&A stories. This very day, on Nov 2nd last year we got breaking news: Broadcom is buying Brocade. It had only been 7 months since Brocade acquired StackStorm. We were barely settled there…and to make it really interesting: Broadcom announced that it divests Brocade’s network assets. We were up for sale. In parts. Publicly. Quite an unusual situation. Even more so when it lasts half a year. Half-a-year of free fall until finally Extreme popped up and snagged Brocade’s networking cake with StackStorm cherry on top. Then another half-a-year of hanging out in mid-air with the landing date jumping further away, just when we thought we were about to land. You can guess what it could possibly do with productivity, morale, working visa situations, ability to attract, hire, and keep talent, budgets, community marketing, planning, innovation…
I can’t express enough my pride and gratitude to our incredible team going through these tough and tiring times with performance and style. We launched StackStorm Exchange, continued to deliver new and exciting features like new Pack management, Docker support, Realtime action output, and st2.ask. We kept holding up the community and supporting our paying customers. We’ve cranked out 5 releases and 6 patches. Most importantly, we held the team together, and through tough times our team’s bond was made stronger. As a team, we decided to go to Extreme.

Why do we see Extreme as a good home for StackStorm? Because uncertainty ends. Becoming a part of $1B+ mothership that challenges Cisco gorilla in Gartner magic quadrant does bring more certainty to StackStorm (and to you, the users of the project) than we ever had before. But what else? Honestly I was quite skeptical at first: Extreme Networks? Are they even still alive? Can it possibly be any good? Yes it can. During last 5 months of working with Extreme’s engineering team, I’ve learned that the company has re-invented itself. Their team is charged with the mission, the new management created a culture of directional clarity, transparency, execution focus, and straight talk – a culture where StackStorm team is – finally – a fit. Ah, and also much fun playing with the name: StackStorm goes to Extreme!

What is next?
Our strategy stands: we continue to build StackStorm open-source platform, as well as to offer a commercial version, for the broadest variety of automation use cases (StackStorm does not become a networking product). We accelerate the growth of our community around StackStorm Exchange integration packs, and welcome more contributions to the st2 core. In addition, we continue to help other teams at Extreme who increasingly use the StackStorm platform to reinvent network automation.

Big thanks to our users and community for sticking with us through the tough times.
The future is certain and bright, more good stuff is coming soon.

PS. We are hiring! Shoot an email to moc.mrotskcatsnull@sboj & tell us something great about yourself.