Ansible and ChatOps. Get started 🚀

ChatOps is still a fresh and uncommon thing in the DevOps world, where work is brought into a shared chat room. You can run commands directly from chat and everyone in the chatroom can see the history of work being done, do the same, interact with each other and even learn. The information and process is owned by the entire team which brings a lot of benefits.

You may come up with operations such as deploying code or provisioning servers from chat, viewing graphs from monitoring tools, sending SMS, controlling your clusters, or just running simple shell commands. ChatOps may be a high-level representation of your really complex CI/CD process, bringing simplicity with chat command such as: !deploy. This approach does wonders to increase visibility and reduce complexity around deploys.

StackStorm is an OpenSource project particularly focused on event-driven automation and ChatOps. The platform wires dozens of DevOps tools such as configuration management, monitoring, alerting, graphing and so on together, allowing you to rule everything from one control center. It is a perfect instrument for ChatOps, providing the opportunity to build and automate any imaginable workflows and operate any sets of tools directly from chat.

StackStorm has Ansible integration and during time added a lot of enhanced ChatOps features in <1.0, 1.2 and 1.4 platform versions to help you with real work, not just display funny kitten pics from chat. Below, I will cover how to make ChatOps and Ansible possible with help of the StackStorm platform.

By the way, StackStorm as Ansible is declarative, written in Python and uses YAML + Jinja, which will make our journey even easier.

In this tutorial we’re going to install Ubuntu 14 control machine first, which will handle our ChatOps system. Then configure StackStorm platform, including Ansible integration pack. Finally, we’ll connect the system with Slack, and show some simple, but real examples of Ansible usage directly from chat in an interactive way.

So let’s get started and verify if we’re near to technological singularity by giving root access to chat bots and allowing them to manage our 100+ servers and clusters.

As said before, let’s use Slack.com for chat. Register for a Slack account if you don’t have one yet. Enable Hubot integration in settings. 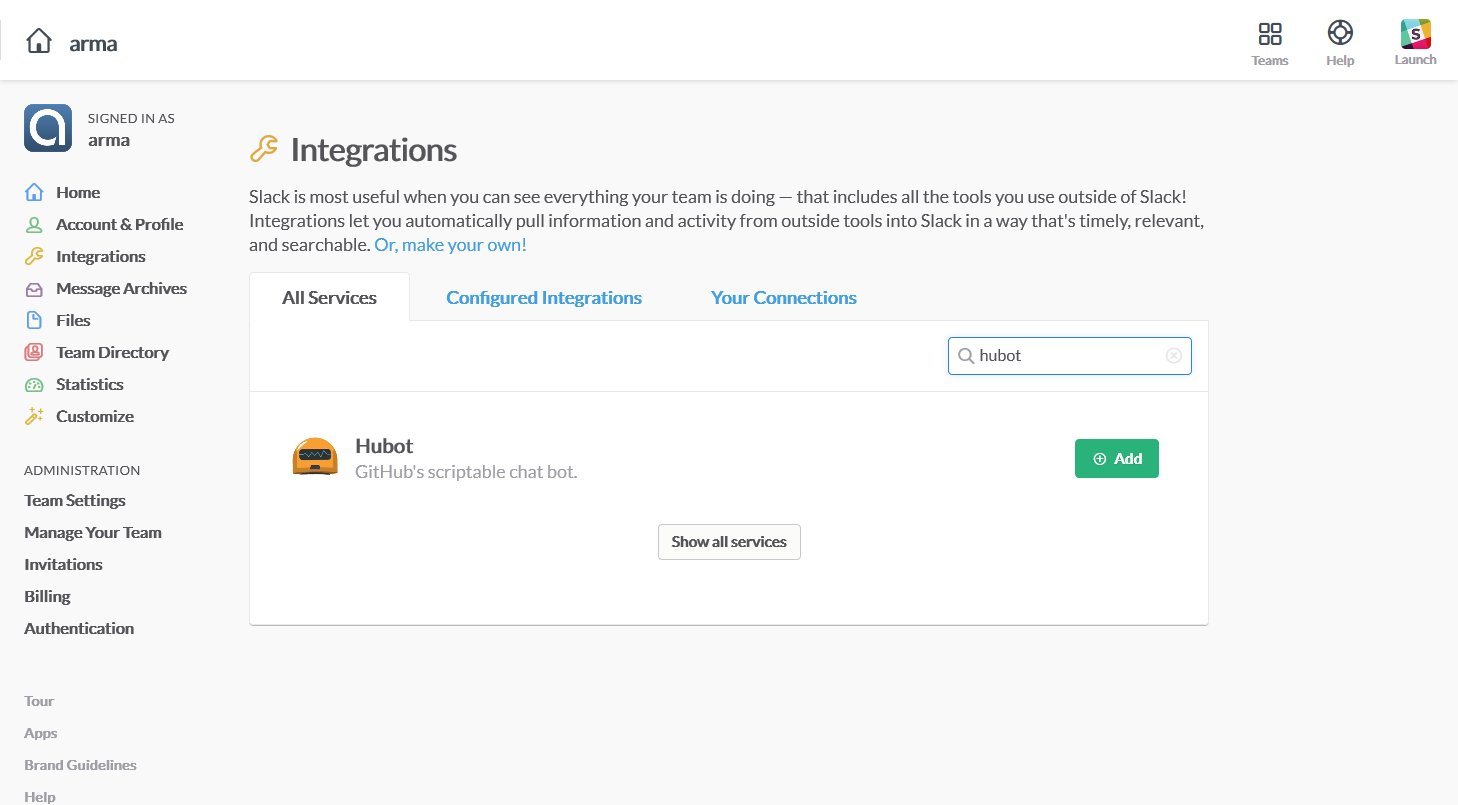 Once you’re done, you’ll have an API Token:

Next, we’ll configure the entire StackStorm platform, show some useful examples as well as allow you to craft your own ChatOps commands.

But wait, there is a simple way!

For those who are lazy (most DevOps are), here’s a Vagrant repo which installs all the required tools within simple provision scripts, bringing you to the finish point and ready to write ChatOps commands in Slack chat: https://github.com/StackStorm/showcase-ansible-chatops

For those who are interested in details – let’s switch to manual mode and go further. But remember if you get stuck – verify your results with examples provided in ansible & chatops showcase repo.

It’s really as simple as one command:

This one-liner is for demonstration purposes only, for prod deployments you should use ansible playbooks to install st2, verify signatures and so on. See https://docs.stackstorm.com/install/deb.html to understand what’s happening under the hood.

The idea of integration packs in StackStorm is that they connect system with external tools or services. We need Ansible pack here:

Now you need to configure the /opt/stackstorm/chatops/st2chatops.env file to suit your needs. It worth taking a look at all variables, but make sure you edit the following envs first:

Restart st2chatops to apply the changes, and you’re ready to go:

At this point you should see Stanley bot online in chat. Invite him into your Slack channel:

After playing with existing commands, let’s continue with something serious.

Step 5. Crafting Your Own ChatOps Commands

One of StackStorm features is the ability to create command aliases, simplifying your ChatOps experience. Instead of writing long command, you can just bind it to something more friendly and readable, simple sugar wrapper.

Let’s create our own StackStorm pack which will include all needed commands. Fork StackStorm pack template in GitHub and touch our first Action Alias aliases/ansible.yaml with the following content:

Note that this alias refers to ansible st2 integration pack

Now, push your changes into forked GitHub repo and you’re able to install just created pack. There is already a ChatOps alias to do that: 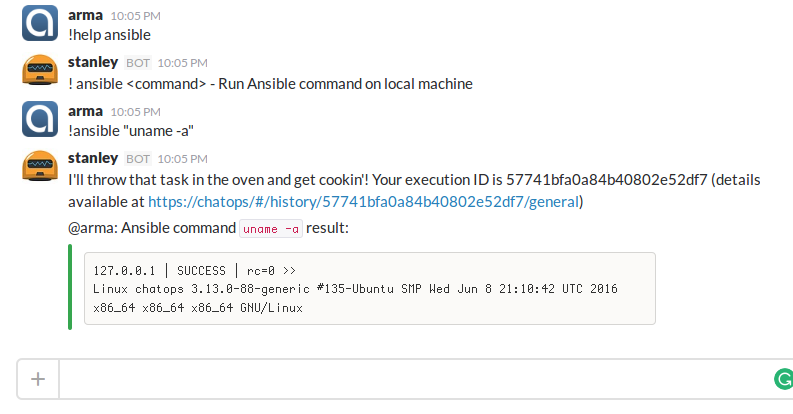 which at a low-level is equivalent of:

Use Case №1: Get Server Status

Ansible has simple ping module which just connects to specified hosts and returns pong on success. Easy, but powerful example to understand servers state directly from chat in a matter of seconds, without logging into terminal.

To do that, we need to create another action for our pack which runs real command and action alias which is just syntactic sugar making possible this ChatOps command:

Make sure you configured hosts in Ansible inventory file /etc/ansible/hosts.

After commited changes, don’t forget to reinstall edited pack from chat (replace it with your github repo):

It’s pretty handy that you can keep all your ChatOps command configuration in remote repo as StackStorm pack and reload it after edits. 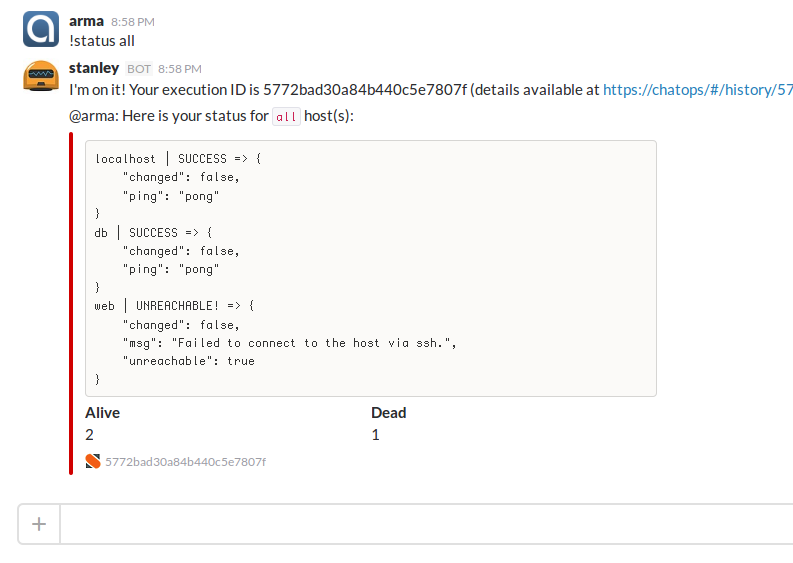 It’s really powerful, anyone can run that without having server access! With this approach collaboration, deployment and work around infrastructure can be done from anywhere in chat: are you in the office or work remotely (some of us may work directly from the beach).

Have you ever experienced when a simple service restart can solve the problem? Not ideal way of fixing things, but sometimes you just need to be fast. Let’s write a ChatOps command that restarts specific services on specific hosts.

Let’s get our hands dirty now: 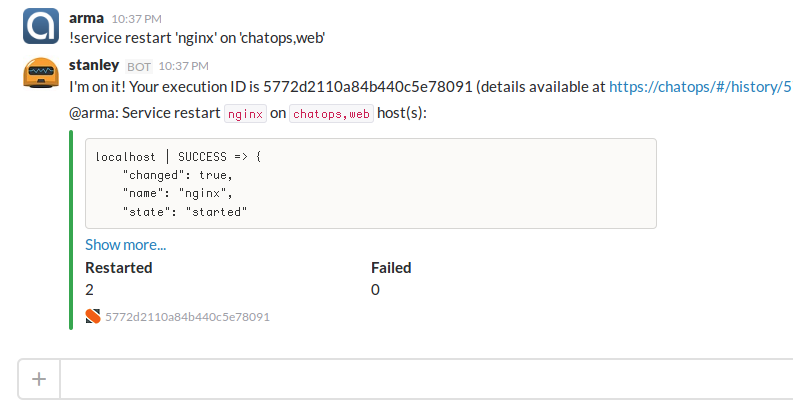 And you know what? Thanks to the Slack mobile client, you can run those chat commands just from your mobile phone!

We want simple slack command to query the mysql processlist from db server:

Note that we made hosts parameter optional (defaults to db), so these commands are equivalent:

Your DBA would be happy!

Use case №4: Get HTTP Stats From nginx

We want to show HTTP status codes, sort them by occurrence and pretty print to understand how much 200 or 50x there are on specific servers, is it in normal state or not:

Now it looks more like a control center. You can perform things against your hosts from chat and everyone can see the result, live!

Imagine you should patch another critical vulnerability like Shellshock. We need to update bash on all machines with help of Ansible. Instead of running it as ad-hoc command, let’s compose a nice looking playbook, playbooks/update_package.yaml:

This playbook updates the package only if it’s already installed, and the operation will run in chunks, 25% of servers at a time, eg. in 4 parts. This can be good if you want to update something meaningful like nginx on many hosts. This way we won’t put down entire web cluster. Additionally, you can add logic to remove/add servers from load balancer.
You can see that {{ hosts }} and {{ package }} variables in playbook are injected from outside, see StackStorm action actions/update_package.yaml:

And here is an action alias that makes possible to run playbook as simple chatops command,
aliases/update_package.yaml: 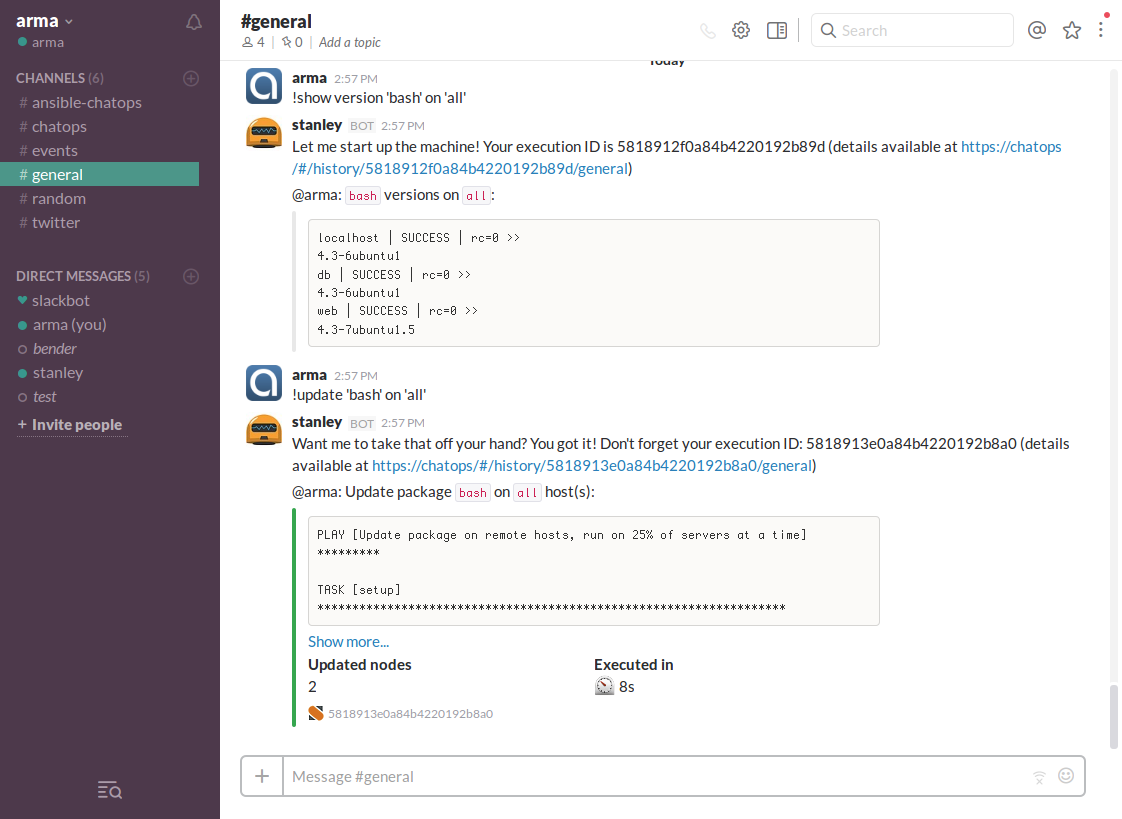 A big part of our work as DevOps engineers is to optimize the processes by making developers life easier, collaboration in team better, problem diagnostics faster by automating environment and bringing right tools to make the company successful.
ChatOps solves that in a completely new efficient level!

One more thing! As you know Ansible has a well known love for the holy cowsay utility. Let’s bring it to ChatOps!

Summon cows in a ChatOps way:

These are simple examples. More complex situations when several DevOps tools are tied into dynamic workflows will be covered in future articles. This is where StackStorm shows its super power, making decisions about what to do depending on situation: event-driven architecture like self-healing systems.

Want new feature in StackStorm? Give us a proposal or start contributing to the project yourself. Additionally we’re happy to help you, – join our public Slack and feel free to ask any questions if you can’t find your answer in our docs.

So don’t stop here. Try it, think how you would use ChatOps? Share your ideas and stories (even crazy ones)!