This year was intensively active and the biggest difference is that we got such a serious reinforcement of new Maintainers willing to take the project to the next level. With more than ten members, the StackStorm project had a remarkable year.

We’ve also reduced the barrier to entry for the newcomers. While entry-level Contributors don’t have responsibilities at all, with the most recent change to the GOVERNANCE.md, TSC Maintainers don’t have strict obligations like dedicating 1 full day/week to the project like it was in the past. We hope this lowers the maintenance burden for the StackStorm Technical Steering Committee (TSC) members that are helping the project mostly during their free time.

New people gained their official StackStorm contributor status, many joined us as new TSC members or were promoted to senior maintainers. We’re so lucky to have all the people on board helping the project!

But there’s no shortage of the tasks and improvements, there’s something interesting for everyone. If you’re using StackStorm, – we welcome everyone to help us maintain the project. Join our Slack #development channel, check How to start Contributing, simply ask where the help is needed most.

There was a big amount of coding done to improve the StackStorm and we’re always looking for more participants to make things happen:

We want to thank everyone for their submitted Pull Requests this year:

Also, a big thanks who reviewed the PRs, tested them, and merged:

Containers ate the software world and continue growing in numbers as the most major installation method, compared to other deployment methods we support like Ansible, Puppet.

Releases are the heartbeat of the OpenSource project, one of the most important parts that bring updates to the users.

StackStorm TSC is using a release rotation process. Release Manager has a Release assistant helping him. We’re committed to cutting a new st2 version every three months and did four releases this year: 3 major plus a patch. That accumulated so many features, changes, bug fixes, security enhancements, and more.

Shipping a release itself is a great achievement driven by the discipline and diligence and it’s not an easy effort. Big shout out to everyone who was involved in a release this year!

Enterprise features like RBAC, LDAP, Workflow Designer previously included in the paid Extreme Workflow Composer after donation to the LF were fully integrated into the open-source version of stackstorm and became part of the core platform.

Shipped with the v3.4.0 this was probably the most awaited and exciting release for our community. Thanks to Extreme Networks, our partners from Orchestral.ai, intive, Bitovi, and contributions from the Starbucks SRE team to migrate these features.

Big refactoring work around the database layer was done by Tomaz Muraus and landed in the v3.5.0 release. Based on the benchmarks and load testing, most actions that return large results and workflows with large datasets should see speed-ups in the range of up to 5-15x. Read more in the blog Making StackStorm Fast, – an excellent work and technical write-up by Tomaz. 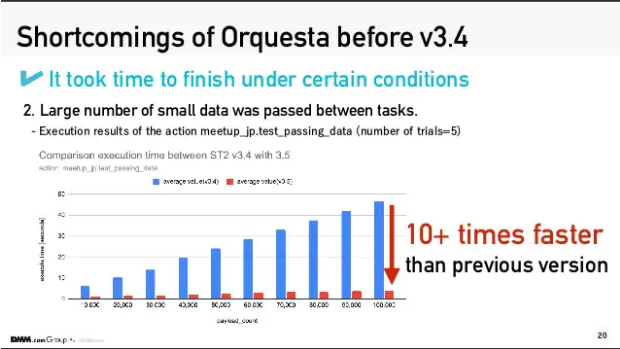 There are really great slides highlighting the speedup by the StackStorm Contributor Hiroyasu OHYAMA from our community in Japan.

Community Japan organized several #orchestration and #automation meetups (https://stackstorm-jp.connpass.com/) and was a valued sub-community of the StackStorm project. Say hi to them in #stackstorm-jp Slack.

They also could acquire the Twitter handle “StackStorm” which was previously owned by the Japanese DJ. As they gifted it to the OSS project, we migrated from @Stack_Storm to @StackStorm in Twitter. Something that wasn’t possible before is now possible with the power of the open-source neutral community. Yay!

With the 5 founding partners, StackStorm has launched its Partnership program.

The goal is to recognize the companies who support StackStorm is it monetary, community, or engineering contributions. We want to thank our partners: Bitovi, BlueCycle, intive, Orchestral and Encore for helping make StackStorm even better this year.

If you’re using StackStorm and need professional services, training, or custom solutions, reach out to our official partners: /partners/

PackageCloud as an Infrastructure Partner

This year we also welcomed PackageCloud as a partner, which supported us with a service for hosting and distributing the deb/rpm packages to its community. Read more, and if you need a repository with rich APIs to host your artifacts, – PackageCloud.io is the service we know works flawlessly since 2015. Thank you, PackageCloud!

The word of mouth

With over 100+ updates, lots of news, blogs from our open-source crowd, and great things to share, I’d like to additionally highlight our community contributor Rick Kauffman from HPE who produced so much quality content: blogs, HOWTOs, tutorials, championing the StackStorm Automation this year. That content made us Tweet it!

StackStorm HA deployment in Kubernetes had so many changes, improvements, refactorings, and security adjustments this year. With the most recent v0.80.0 release, our new TSC member Jacob Floyd is doing a great job adding the features and enhancements and we’re looking forward to calling the K8s deployment stable soon with the upcoming v1.0.0 Helm chart release.

If you’re into K8s, join the #k8s channel in Slack. We need more contributors to try new features!

We’ve sunsetted our old forum forum.stackstorm.com based on paid Discourse in favor of new Github Q/A Discussions. Besides being free, it integrates with the native Github community that the project was built around and we can benefit from the maintenance, access levels, and the power of a single platform. Long-term it provides a better experience for everyone: users who seek their questions to be answered and contributors willing to help the project community.

We’re glad that Open Source security topics are on the rise today and how the community paying attention to security importance in general, trying to improve the story around the software supply chain risks. We’re taking security seriously, too. This year we’ve filed two StackStorm CVEs with the fixes. If you have any security issue to report, please check out /security/.

Security is a topic of constant improvement with multiple vectors and risks. Here is the roadmap project with the security enhancement ideas and topics like artifacts signing, 2FA, secrets sharing between the maintainers, avoiding black-box releases, more transparency, additional reviews for mission-critical components, the work in progress like reducing the risk factor behind the StackStorm Exchange, and more.

We definitely have lots of ideas and opinions, but missing the hands to implement them. If your business depends on StackStorm in production, we call for your participation. As Maintainers, we can’t cover everything and look for more eyes and hands to help us in making the project more secure.

This year Docker Hub granted us whitelisted open-source status. This allows our community to download official StackStorm Docker images without being rate-limited. Thanks, Docker!

LFX Community Bridge is doing a great job of being a transparent platform to accept donations as well as track publicly all the expenses and reports. We invite our community to donate to the project needs here: /donate/

In a meantime, we realized that many expenses were driven by the old enterprise legacy. We’ve reduced our costs to a minimum viable needs for the open-source project. See the expenses. This makes the project more sustainable, self-sufficient and reduces the operational burden of managing all the paid accounts, infrastructure, and dependencies we rely on. So eventually we have more time on what matters, – the technical side of the project. From multiple expenses ~$400/mo to a single expense sub $50/mo and looking forward to more optimizations next year.

StackStorm adoption was imminent as a leader in workflow automation with many enterprises including StackStorm as a recommended skill in the Infrastructure, Automation, and Networking. This is new: StackStorm was mentioned as a technology needed for the job between other tools like K8s, Terraform, Ansible in companies like VMware, Salesforce, Activision Blizzard, Palo Alto Networks, Hewlett Packard Enterprise, Mastercard, NTT DATA, Dell Technologies, and others. But it’s a tip of an iceberg and there are many more who use StackStorm. We invite you to add your org to the ADOPTERS.md, – it’s easy as a one-liner PR!

If your organization is using StackStorm and #hiring, – just mention the technology in the job description and ping us, – we’ll be happy to share it with our community of open-source professionals. We believe it’s a win-win for everyone and looking forward to building a good relationship with our Adopters.

The power of community

The Open Source community is all about sharing, supporting each other, development, building great things, and creating new opportunities while having fun together. If you’d like to take part in it, – join us in Slack and Github at stackstorm.com/#community. If you’re relying on StackStorm in production and willing to give back to the community via code contributions, donations, infrastructure, sharing your adoption story, or just submitting a fix upstream, – we need your help!

The project is looking forward to the new 2022 and we welcome everyone to join the #automation movement!